The following example is from a data set of vegetation (including forested and nonforested areas, wet and dry grasslands, and varying bedrock type) of the Nature Conservancy's Tallgrass Prairie Preserve in Osage County, Oklahoma.  The cover of vascular plants was estimated in a number of 10m x 10m quadrats, and a number of environmental variables were measured, including topographic information, woody cover, and soil data.
An excerpt of the output (*.log file) of a CCA follows:
N name    (weighted) mean    stand. dev. inflation factor


The means of the sample scores are all zero, as they are supposed to be, and since the environmental axes (that is, the sample scores that are linear combinations of the variables) are standardized, their standard deviations are one.  See Statistics.

The weighted means and standard deviations of the variables follow.  The first three variables are tree basal area, tree density, and the estimated percent cover of woody plants.  The fourth is the slope, and the fifth is the percent cover of rocks.  The sixth is an estimate of canopy tree cover, based on a device known as a hand-held spherical densiometer.  The remaining variables are all assessed from soil samples.

The final column is the "variance inflation factor" or VIF.  A large VIF implies that the variable is redundant with other variables in the data set.  So for example, woody cover (variable #3) has a high VIF, which is not surprising since we expect it to contain some of the same information as tree density, basal area, and especially the spherical densiometer estimate (variable #6).  Likewise, the logarithm of Calcium is redundant with other soil cations as well as soil pH.  A variable with a VIF of 1.00 is one that only has unique information (i.e. is uncorrelated with the others).

Note that CANOCO will not calculate the VIF of a variable which is the last member of a list of categorical variables, or one which is a linear combination of other variables.  See Environmental Variables in Constrained Ordination. A value of zero is reported, although technically such a variable would have an infinite VIF.

An examination of the table above might aid in the selection of superfluous variables to remove from an analysis.

The below is excerpted from the same log file, and represents a summary of the eigenvalues.

Note from this summary:

The species scores (omitting infrequent species from display) and environmental scores from the ordination are shown below.  In general, variables associated with forest conditions point towards the right, and those associated with high levels of bases in the soil point upwards.  Reassuringly, the species scores reflect our natural history knowledge, with forest species towards the right, species requiring open conditions to the left, species growing on limestone towards the top, and those on sandstone towards the bottom. 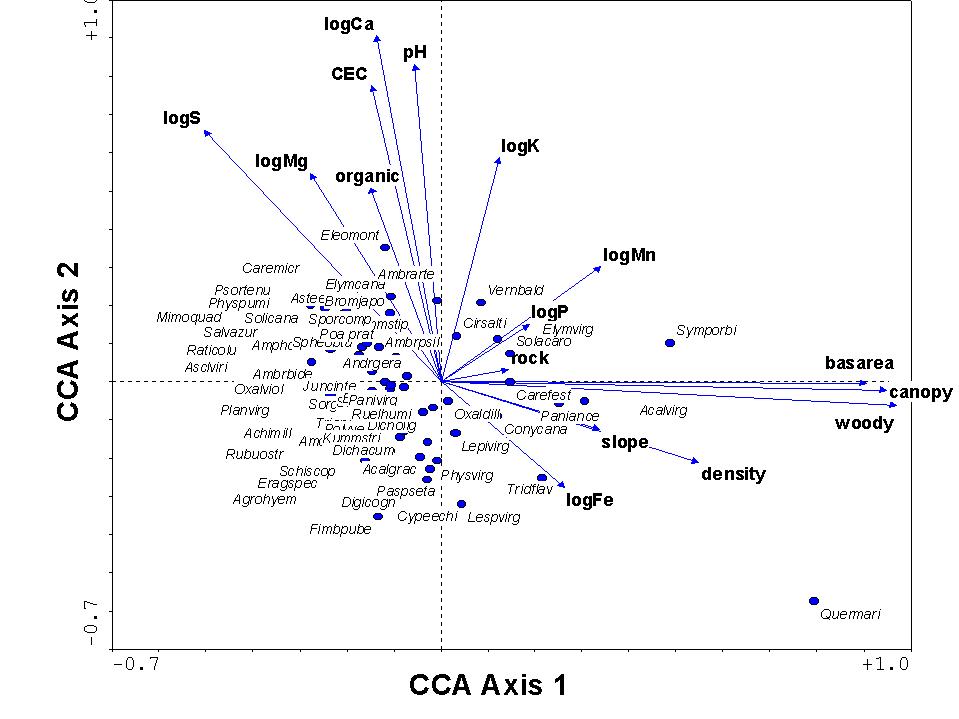 In general, we can conclude from the above that there are two dominant factors (or at least, two factors related to variables we measured) controlling vegetation at the Tallgrass Prairie Preserve: one is related to forest vs. open conditions, and the other is related to soil acidity.  It seems that these two factors are relatively unrelated to each other, since they are roughly orthogonal (at right angles) to each other.

In some cases, we might be interested in testing whether two different groups of variables are redundant with each other, or whether they each explain unique aspects of species composition.  This is the purpose of Partial Ordination.  However, we can go even further, and to partition the variance (i.e. inertia) into components:

Such a procedure is called variance partitioning or variation partitioning.  Although I briefly summarize the procedure here, please see the references below for more details.  Suppose we wish to calculate these variances from the Tallgrass prairie data, and subdivide our data into "Soil" (variables 7-16) and "Other" (variables 1-6).  Thus we can relabel A through D above as:
Where S and O refer to Soil and Other;
"|" means "given", or synonymously "factoring out" or "covarying out";
"Ç" refers to the intersection;
"TI" for the total inertia;
" È" for union.

The only number that remains the same as in our previous table is the total inertia.  S|O is sum of all canonical eigenvalues, or 0.379.

Since the value of OÇS is smaller than O|S and S|O, we can conclude that the two sets of variable are not very redundant in explaining species composition, and each set of variables are largely explaining unique aspects of, or 'gradients in', species composition.  This is not very surprising to us, since we noticed from the CCA diagram that the two sets were largely orthogonal.  However, in many real world situations, we do not have such a neat 2-dimensional result, and it is often not clear whether redundant sets of variables do indeed explain unique variation.

We can report our variance partitioning in the form of percentages and pie charts: 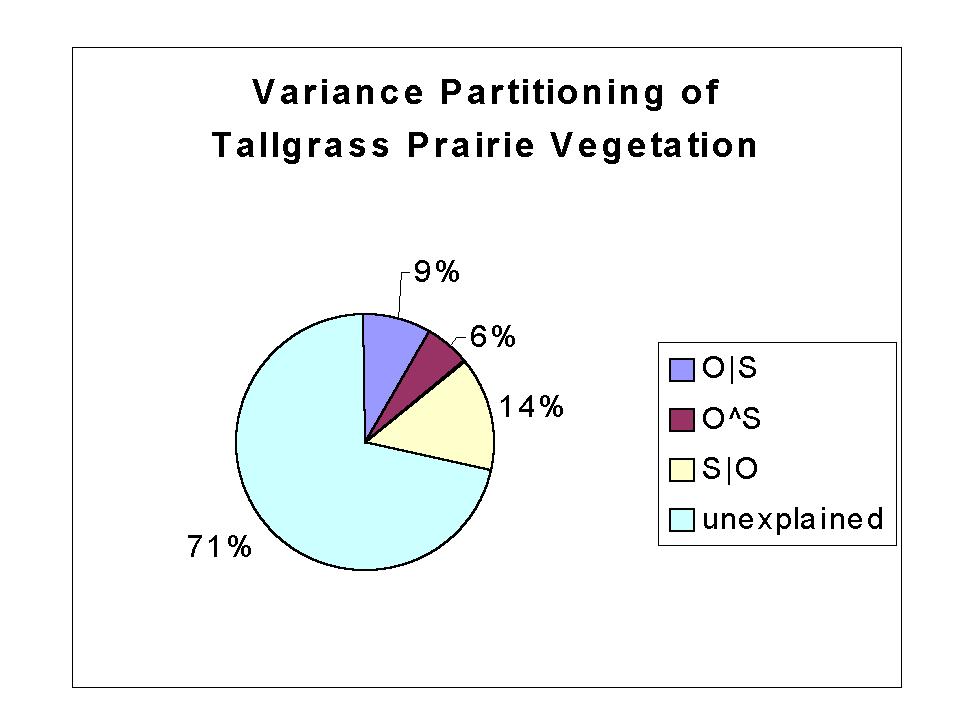 We can also use the above to summarize each set of variables separately, e.g. Soil explains 14%+6% or 20% of the variation in the data set, while the other variables explain 9%+6%=15% of the variation.  However, we need to exert some caution in saying that soil is "more important" than the other variables, for three reasons: 1) it is clear that the first CCA axis is predominantly related to woody cover, 2) there are more soil variables than the others, so it might be an artifact of variable number, and 3) there are some general concerns about variance partitioning, to be discussed shortly.

Some problems with variance partitioning

Since the variance we are partitioning in CCA is not really a true variance, but rather an inertia, we run into certain potential problems.  Instead of detailing them in a list, I demonstrate them by example.  Suppose we have a (ridiculously) smooth noiseless coenocline, of identical species evenly placed along a noiseless gradient.  Furthermore, let us suppose we sample evenly along this gradient: 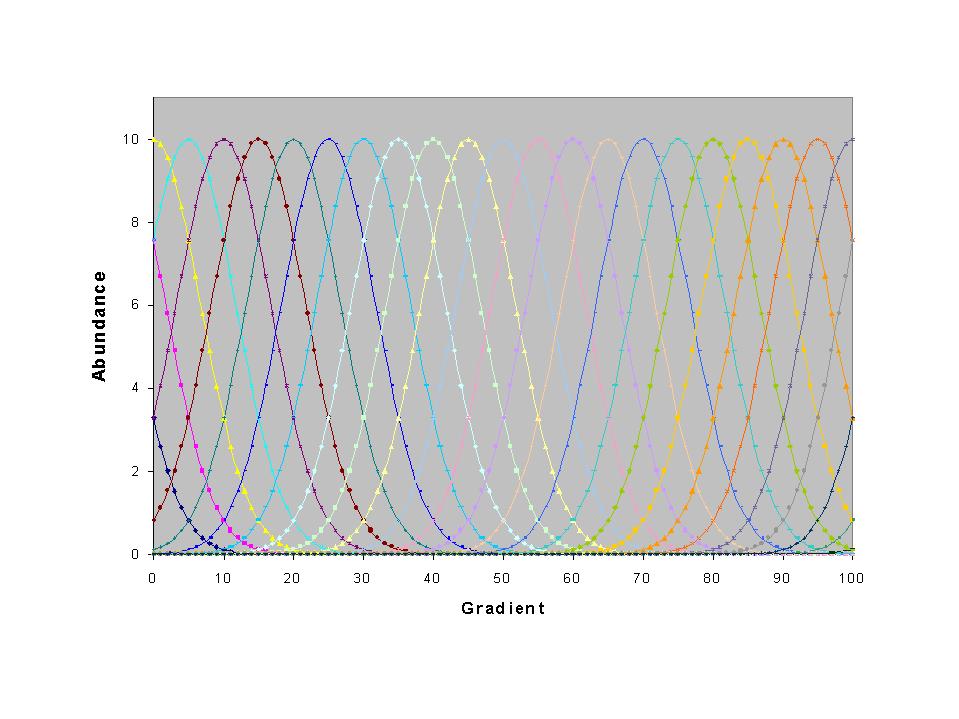 Let us also suppose that we have noiseless measures of the environmental gradient.  Of course, we never observe such a neat pattern in nature.  But if we did, this sort of gradient should be able to explain 100% of the total inertia, or spread of species scores.  But this is what happens:

Since there is only one variable, then the first axis has 100% of the cumulative variance of species-environment relation, but that would happen even if the variable was random.  The first eigenvalue is quite high, which does suggest a very strong gradient.  However, note that the total variance explained, 0.953, is a small portion of the total inertia, 3.927.  If we wished to calculate an equivalent of  r2, we would have 0.243.  This is a pitifully small number, compared with the 1.000 it should be!

One of the take-home messages of this is that an investigator should not be disappointed if the variance explained seems small.  It may have nothing to do with nature.

What are the reasons for the low variance explained?  I must admit that it is hard to figure out completely (perhaps if we do, we will also "solve" the arch effect), but here are some hints.  Note that the eigenvalue cannot exceed 1.  This means that unless the total inertia is less than 1, it is not possible to explain it all even with a perfect eigenvalue.  Also remember that Correspondence Analysis suffers from the arch effect.  Usually, CCA does not display an arch because it is constrained by environmental variables which do not have an arch-like structure.  However, the tendency to form an arch is still there, and can be seen in the unconstrained axes.  In other words, the arch itself can be said to have an inertia or variance.  In most real cases, we hope that this variance is part of the "unexplained" variance, but it is indeed possible for at least part of it to show up in the "explained" portion.  Suppose we had a variable that did not explain species composition, but happened to be correlated with a quadratic function of the most important variable (i.e., it has an arch-like relationship to the variable).  Then this variable would erroneously appear as important, AND cause an arch effect.  In the example of the clean gradient, when we include our variable and our variable squared, we get:

Note that the total variance explained jumps up substantially (from 0.953 to 1.771), even though the variable squared does not influence species composition.  In a sense, it is now "explaining" the arch. 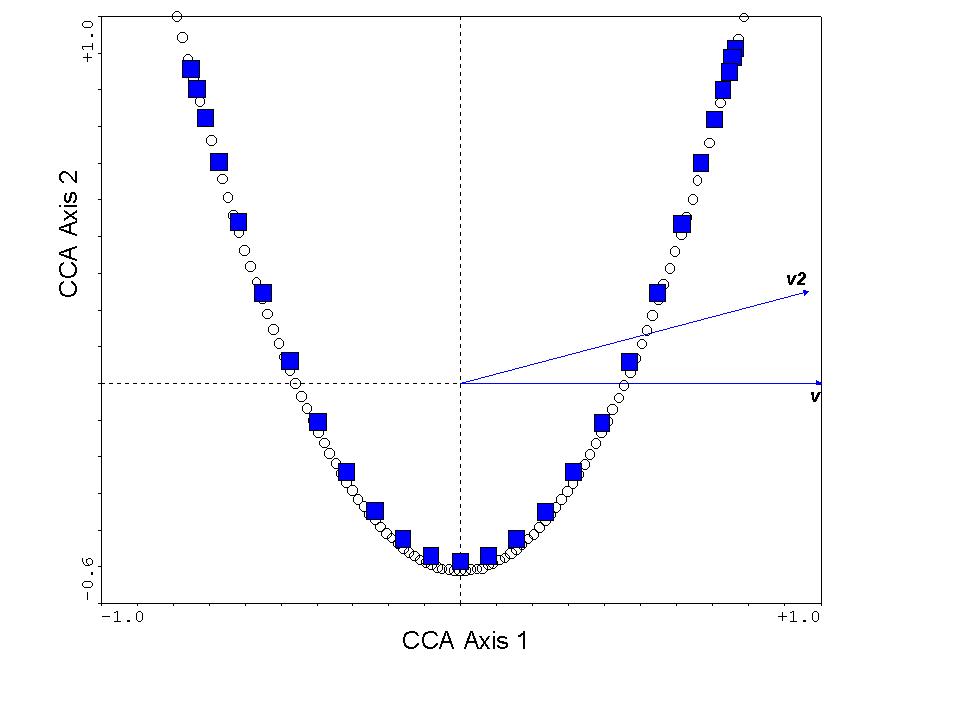 The squares are our species scores, the circles are the sample scores, "v" is the variable representing the true gradient, and "v2" is this variable squared.  Not surprisingly, v is lying directly on the x-axis, as it is the primary determinant of species composition.  Also, v2 is highly correlated with v, so it points in roughly the same direction.  However, v2 is a nuisance variable, since it does not "explain" species composition.  Instead, it clearly "explains" the arch effect.  So the new, additional, variance explained is largely nonsensical.

Incidentally, v2 explains a highly "significant" amount additional variance, after factoring out the effects of v (this testing is fairly easy to do in CANOCO's manual forward selection).  Also, v3 and v4 each explain "significant" additional variation.  Of course they all should not, since we have simulated the coenocline in only one dimension.  This teaches us to be cautious of:

Rune Økland has independently discovered and analyzed some of the problems listed above (Journal of Vegetation Science 10:131-136; 1999).   He proposes that in variance partitioning, we simply ignore the "unexplained variance" term, and focus our decomposition of variance on only the "explainable" variance, i.e. OÈS.  I generally agree with this advice, but still warn that the arch inertia may be lurking somewhere in this "explainable" portion......


This page was produced and is maintained by Michael Palmer.