The word "Statistics" is variously defined by statisticians - but is usually used in the context of testing null hypotheses.  Some use "statistics" to include ordination and classification.

Suppose we are interested in the effects of fertilization and lake area on the species richness of invertebrates in a lake.

Is there an effect of fertilization on species richness? To answer this, we need to set up a Null Hypothesis:
H0: m f = m nf
m (the Greek letter mu) is a symbol that represents the true mean of the population. We can never know it, but we can estimate it (using the simple average), and make inferences about it.

We calculate t according to the formula:

TESTING FOR CORRELATIONS BETWEEN VARIABLES 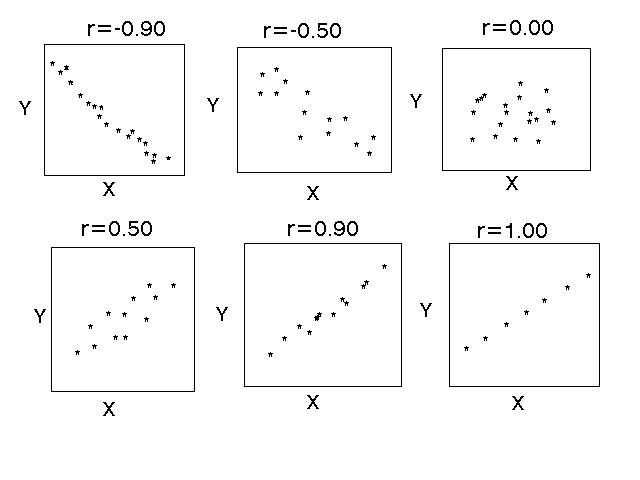 r2 has a special meaning: The proportion of variance in y which can be accounted for, or explained, by x.

The following is the formula for r:

Now that we have r, how do we know if it is significantly different from zero? We must first convert our r into a value of t using the following formula:
t = |r| [(N-2)/(1-r2)]0.5
We now look up this value of t in the t table with N-2 degrees of freedom, in a way very similar to that done for the t-test.
One important thing to remember about correlation is that it does not necessarily imply direct causation.

As previously discussed, correlation is the process of finding the strength of the relationship between variables. Furthermore, correlation results in a measure of the significance (i.e. a statistical test) of the relationship. However, scientists often wish to move beyond simply testing, and would like to find a mathematical function which models the relationship. This modelling process is termed regression (more colloquially known as "line fitting" or "curve fitting").

This section describes linear least-squares regression, which fits a straight line to data. If a variable y is linearly related to x, then we use the formula for a line:

Or more commonly in the context of regression,

^
y = b0 + b1x
where b1 is the slope of the line, and b0 is the y-intercept. Note that the y has a caret (^) over it. This is pronounced "y-hat" and means it is our estimated value of y. We need this symbol because is because it is extremely rare for actual data points to fall exactly on a line.

yi = b0 + b1xi + ei     for a particular pair of x's and y's.  The term ei is the residual for observation i; that is, the difference between the prediction and the observed value.  Note that the 'hat' is gone for the y.

The regression  function is not knowable, but we wish to make inferences about it. The larger our sample size, the more confident we are about our function, as long as the assumptions are correct.
The assumptions include:

Note that both b1 and b0 have units associated with them; they are not dimensionless.  The slope will be in units of y-units divided by x-units, and the intercept will be in y-units.  Also note that r must have the same sign as b1.

By performing the appropriate calculations, the fitted regression function for the invertebrate example turns out to be: 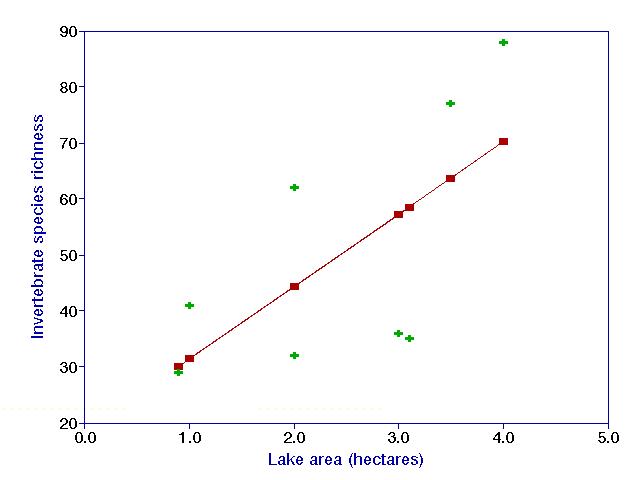 The above figure displays data (green crosses), as well as the fitted regression line (through the red squares, our "y-hats"). Note that the line fits the data fairly well. However, given that our sample is incomplete (we have not collected data from all possible lakes), the data have a little bit of randomness involved with them. We can therefore never say the line we find is the "real" or "true" line (This is akin to the reason we can never truly accept the null hypothesis).

However, we can say that the line is our best hypothesis of the relationship between x and y, given the assumption that the variables are linearly related. Often relationships are not linear; in this case more sophisticated techniques are needed.  We know in this particular case that the assumption is technically incorrect, since the model predicts 18.5 species when the lake area is zero, which appears to be a nonsensical result.  But in most cases, we are not too concerned with misbehavior of the model outside the range of our data.

How is the calculated line our "best" hypothesis?  The technique chooses the one line, out of all possible lines, which is closest to all the data points. In particular, the sum of the squares of the vertical distances between the line and the data points is as small a number as possible:
N     ^
S (yi-yi)2 is smallest, given the data.
i=1
The fact that the difference is squared is the reason the technique is called linear least-squares regression.

^
(yi-yi) has another name: the residual  (often abbreviated ei).   The residual is taken as a measure of the abstract parameter e i , or true error, mentioned previously.  Of course, 'error' is not to be interpreted to imply mistakes or sloppiness - though such is not be ruled out entirely, either.

Variables are often in different units, so how can they be compared?

They can be standardized:

Ranks - Data are sorted by value, and the values are replaced by the order in which the data points are listed. 1 = lowest value, N= highest value, and ties are given the tie of the ranks.

A constant unit equals a constant multiple on the arithmetic scale. For example, A tenfold difference in length will be the same distance apart as a tenfold difference in dollars. The difference between 1g and 30g will be the same distance as 1 ton and 30 tons. Logarithms are not defined for values of zero or less.  Therefore, sometimes people add a number (such as 1) before taking the logarithm.  However, this practice does not result in a true standardization.

New value = value/maximum
This only makes sense when the minimum possible value is zero.

Standardized by subtracting the mean, then dividing by the standard deviation.

This is the most common way to standardize, and it has some nice mathematical properties. The mean equals zero, and the standard deviation AND the variance equals 1.
If you standardize all variables by this method, you don't have to worry about y-intercepts!
This is because:

Note: the last three methods of standardization are linearly related to the raw data.

"Standardization" is a special case of "transformation", but is special in that it has no units, and therefore we can compare variables that were originally measured in different units.

This page was created and is maintained by Mike Palmer.

To the Ordination Web Page